Joined 8 mo ago
·
31 Posts
White Motorcycle Concepts has created their latests prototype, the WMC250EV that say can become the world's fastest electric motorcycle.

It has a giant air duct down the middle of the car that they say reduces drag by 70 percent so they can reach 250 mph! 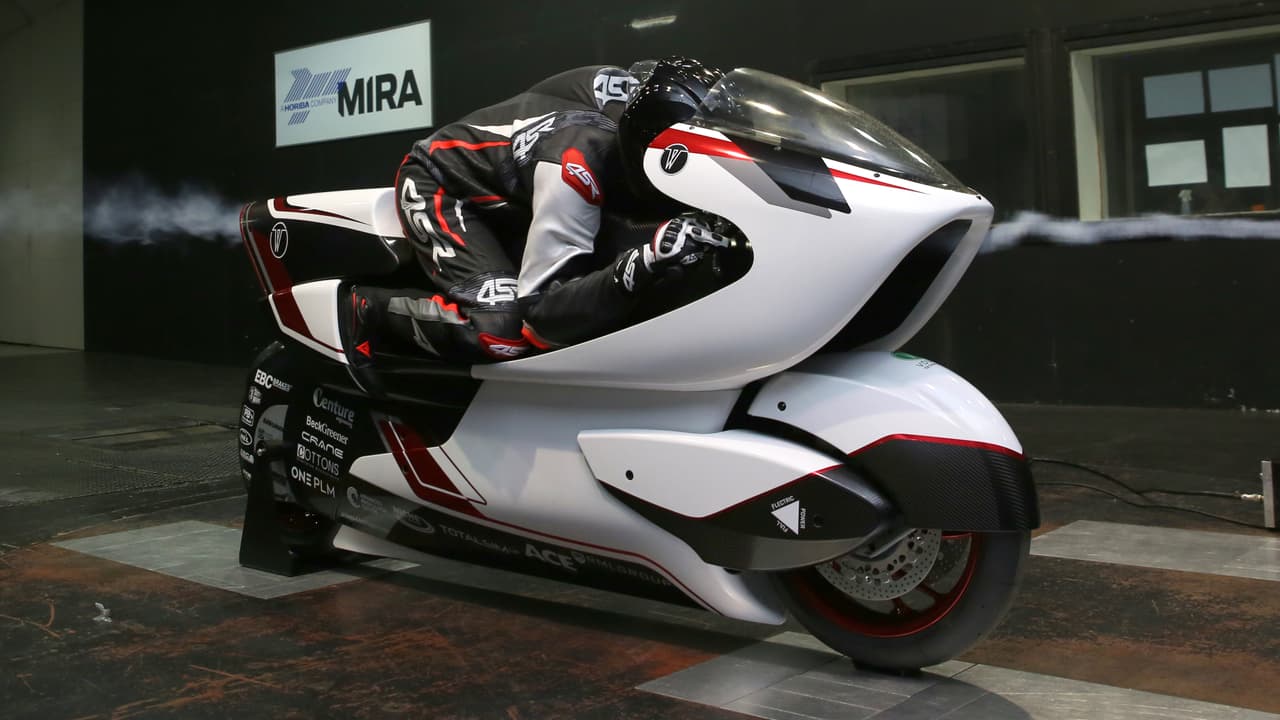 This 250mph electric motorbike has a massive hole in it

Here’s something to really twist your melon. It’s called the WMC250EV, a radical electric motorbike that’s taken traditional two-wheeled packaging, screwed it into a ball then tossed it over its shoulder. Why? In order to go really, really fast. But also to make bikes of the future a lot more efficient.
The secret is pretty obvious: that MASSIVE hole right through the middle of it. It’s wild – like someone got a giant apple corer and lanced it through a motorbike’s heart. Actually, that’s exactly what a clever chap called Robert White did.

He’s been helping make fast things go faster for the last 25 years, having worked on Prodrive’s LMP1 prototypes, Aussie V8 Supercars and Mercedes’ F1 car. But then he thought some of the clever tech the four-wheeled world was using could be applied to two. So he’s taken some of top-flight four-wheeled racing’s tricks and applied them to the world of two wheels.

So let’s talk about that giant chasm through the chassis. It’s officially called ‘V-Air’; a duct at the centre of the bike which forces air through the vehicle, rather than around it. The difference it makes is pretty remarkable, reducing drag by up to 70 per cent. It’s only possible because EV powertrains can be flexible in their size and shape, where combustion engines are fixed within the frame. So the electric powertrain sits like a slab down below (good for centre of gravity), then the duct channel sits above, while the rider makes up the rest of the silhouette, straddling the bike while mildly defecating through fear.

But there’s another benefit to this unique package: you can hook up the front wheel and force drive through that too. So Robert has. That’s called ‘D-Drive’, two 20kW motors that power the front wheel – making this a two-wheeled drive bike. Think bike-y Quattro. Just half the wheels. However, it’s also wired up to deliver energy recuperation via regenerative braking, just like F1 and Le Mans cars. This isn’t possible on your normal run-of-the-mill motorcycle, as the front wheel isn’t connected to the drivetrain. And is normally fighting to stay on the ground.

Two 30kW AC motors power the rear wheel, so there’s 100kW total which is equivalent to 134bhp in a bike that weighs 300kg and has the aerodynamic profile of a drinking straw. It’s fed by a 15kW Lithium-ion battery and most of the componentry is either made of carbon or aluminium. Robert’s aim is to break both the British and world electric land speed records over the next 12 months. Former six-time world champion Max Biaggi is the man to beat. He set 11 new FIM World records aboard a Voxan Wattman last November. His fastest two-way mark for the EV Partially Streamlined class was 245.10mph for the flying quarter-mile, with a fastest one-way speed of 253 mph. His new record for the flying mile now stands at 228mph. Robert thinks 250mph+ is doable. Better hold on tight.

Smashing records and going exceedingly fast isn’t the end game though. This aero trickery is with various lawyers around the world being patented, as it’s all applicable to road bikes for consumers down the line when the crotch rocket world gets more and more electrified. Would you be seen riding one? Let us know below.